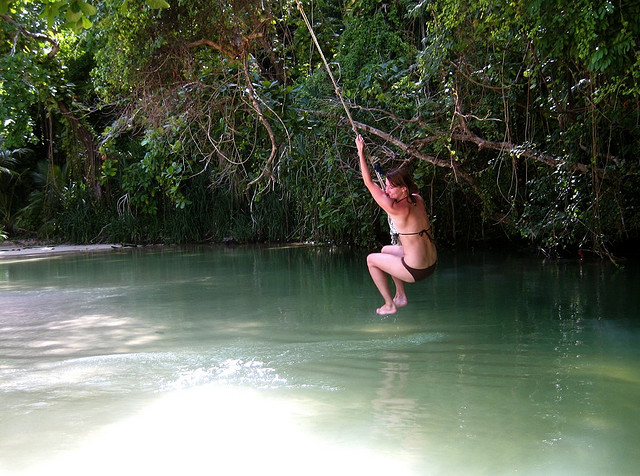 Jamaica was a spur of the moment Travelzoo-inspired trip that we serendipitously bought because it was too good to pass up! It was so spur of the moment that we really just looked up a couple things to do and thought we’d just figure the rest out when we got there…

Surprise #1: they drive on the other side of the road! Luckily Sterling is used to driving on that side of the car because his racecar is built that way, but navigating oncoming traffic was sometimes sketchy and their poor signage didn’t help things.

#2: Not many other people traveling there rented cars, they all took tour buses everywhere. I hate traveling that way and thought everyone else was being travel-sissies, which they probably were, but we also didn’t realize that distances take forever to travel because the roads are so poor. What we thought would be an hour trip to a waterfall took all day.

#3: “All-inclusive” is boring. Not really a surprise, but the shot-glass sized orange juice with breakfast was crazy by week’s end.

#4: Shady business dealings by the rental car company. I’ve always been of the mind that the more you impress, the more business you’ll get! But they claimed we patched a tire that must have been already patched and wanted us to replace the tire for about $500. We didn’t even touch the tire, let alone patch it! Who patches car tires?! Weird. We declined, they were jerks.

Could not ask for a better day in the valley! Mik, Nate and I went…