We woke up with the sun at 5:30am and promptly jumped out of bed to take thousands of photos of Arenal in all of its morning glory. Waking up with a view of a volcano is pretty surreal, especially with such a crazy hellacious day of travel trying to get there. Where am I?! We went off to explore the rest of the grounds and found the hot spring pool inviting us in for a relaxing morning soak/swim. On our way there we were surrounded by lush tropical vegetation and I even saw a few birds I’d never seen before (and I’m a bit of a birder after a few African safaris!). 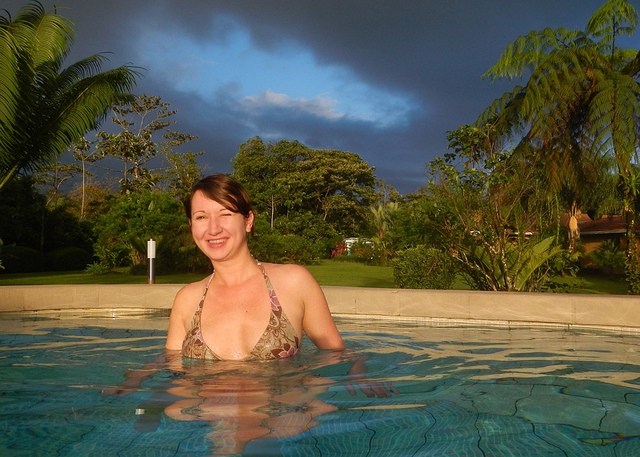 We worked up an appetite standing around in hot water for about an hour, so we went to the restaurant to check out our daily included breakfast. Turns out it was a surprising smorgasbord of awesome! Rule #1 of travel is to sample the local fruit, and their offering paved the way for quite a tropical fruit delight. We had papaya, mangoes, pineapple, watermelon, berries, cantaloupe… you name it. In addition to the delicious eggs, hash browns, yucca, sausage, pancakes, omelette station, etc. 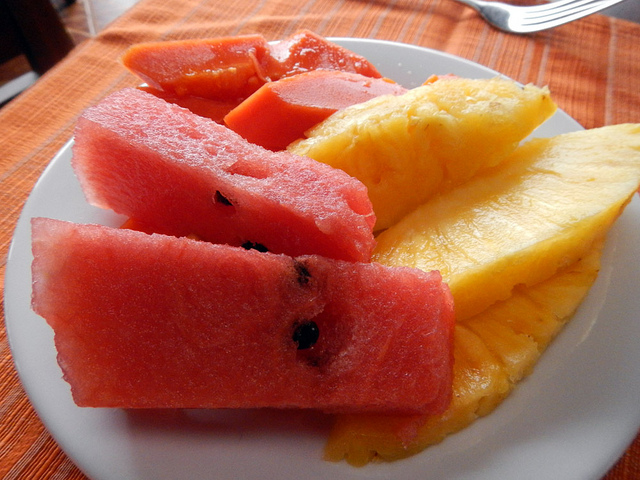 After such an early morning followed by such a gigantic feast, we decided to be lazy tourists and hang out at the pool all morning before going on the Hanging Bridges hike in the afternoon. We’d earned it! It was sunny and probably 80 degrees by 10am and everyone was telling us how lucky we were that the sun and Arenal Volcano were out on our first day, after others had been there for many days and hadn’t seen anything but clouds and rain and more rain. We bring the sunshine, let it be known!

I tend to be an antsy traveler and don’t like to sit still for long: so much to see, let’s go! But since I’ve had a job and limited time to rest, a morning by the pool was about as blissful as it gets. We read and swam and took photos and moved from the regular pool to the hot spring pool and eventually ended up at the hotel restaurant for lunch. There was a 2 mile hike ahead and we needed sustenance! All of the food we ate in Costa Rica made our local food seem a little pathetic in comparison. Fresh, flavorful and good proportions. Up next: Hanging Bridges!

Maluaka 4 Ever – Last Day on Maui

Since we had so much fun at Maluaka with the turtles, we planned our last…